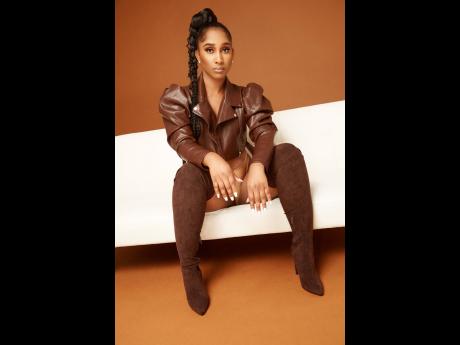 With influences from the likes of Ninjaman, Bounty Killer and Lady Saw, it's no wonder that fierce diva Randalee is carving out a name for herself in true rebel fashion.

The STAR on the Rise, whose given name is Randalee Byfield, felt right at home listening to 90s dancehall music with her family, specifically her father. Going by the additional moniker 'Shy Girl Randa', she steps outside of her comfort zone the moment she goes into artiste mode.

"Music allows me to be aggressive, straight forward, sexy, demanding and fearless," Randalee said. But she is still able to maintain her humble, shy and sweet side. Because of her own reservations, she wasn't sure about becoming a recording artiste. But she decided a few months ago to put her God-given talent to good use.

Aside from the previously mentioned dancehall pioneers, she lists others like Super Cat, Major Mackerel and Silver Cat as her creative inspirations. That musical era gives her goosebumps to this day. She was also guided by R&B, particularly the hits of superstars like Beyonce and Rihanna. And while her father acknowledged her beautiful voice, he encouraged her to deejay as well. This explains the variety and diversity in her sound.

"I don't want someone to hear one song from me and feel like that's all I have to offer. One day, I'll get up and want to sing; another day, I'll want to deejay. There'll be a time when I feel very confident in my sexuality and sing about that. But the next day, I might sing about the Jamaica that I come from or deejay something hardcore," she said.

Randalee, who is also a songwriter, has so far released two singles, Hold Me and Put It Pon Him. The latter touches on the hardcore side while the former is smooth, chill and sultry.

"For Hold Me, I always believe that there is this one guy that can take you out of that shyness, so I'm singing from that perspective, building that character in my head," she said. Randalee says that the reception has been really great so far, with many shocked by this 'newly' discovered edgy side.

Exploring dancehall overseas, she says, has been rough. She is accustomed to going with a melody and the song being built around that. But the experience, thus far, is centred around placing a song on a rhythm. She hopes to one day return to the dancehall hub, her home, and start making music there. Apart from that, she says that being a female artiste is harder than it looks.

The competition among men might be evident but it is respected, according to the singer, but for women, the feeling is one at-a-time. The last few years, she says, women have emerged as forces to be reckoned with. Randalee says that she would love to work with artistes like Shaneil Muir, saving her dream collaboration for the 'clash master' Ninjaman.