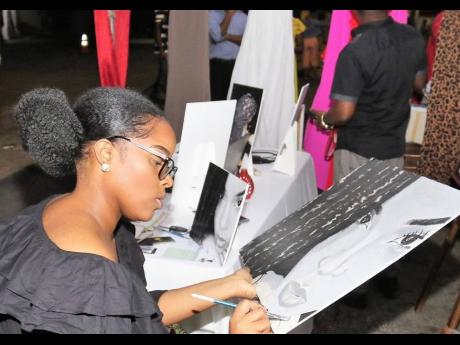 Gospel singer Hephzibah gets lost in her self-portrait.

Hephzibah is the sister of the controversial ‘pastor of the dancehall’, Stephen Blake. While his hunt for souls takes him into the dancehall, her soul-searching has driven her to finding a hidden talent of her own.

Hephzibah is a bank teller by profession and also does gospel music, but for the past two years, she has also made a career out of her pastime – painting portraits.

“Stephen is actually the person that discovered my vocal talent. I used to deejay and sing in the privacy of our home, and he thought my flow was good. He encouraged me to be a gospel singjay, and we have done work together. but his approach is on the more extrovert side; my music is conservative and has a likening to R&B,” Hephzibah shared.

Hephzibah admitted that since the two collaborated on the remix track, God A Mi Boss, music has taken a back seat.

“I sing on several tracks with him, and though I plan to take it further, I haven’t been concentrating much on music in the past months. It is sort of an end goal, and instead, I have been doing my day-to-day and painting a lot more,” she said.

The idea to paint came out of a heartbreaking period when Hephzibah, whose given name is Tiffany Blake, lost her cousin in 2017.

“He passed away two years ago, and he was a lover of everything art, especially paintings, so I dedicated a painting in honour of his name,” she said. “When it was complete, even I was shocked, so that is where my pursuit as a painter started.”

As a painter, her plan is to make her art a big business venture. She does mainly portraits, which cost between US$600 and $1,800 based on the size.

She said: “It is therapeutic, meaning it calms me, from the start to finish. Nothing compares to the feeling I get when I see the end result. It’s disbelief that I have that skill – another gift from the Most High and a relief at the same time.

“Have you ever looked at something and felt it directly at your soul? That is exactly where I want the images to appeal to, and also for persons to formulate their own story from them. That is the same way I want my music to hit.”

She emphasised that she has not abandoned her musical talents. Hephzibah is working on her solo debut single titled Are You Ready. For now, you can find the gospel singer at Acts of the Holy Spirit Ministries International singing with the praise-and-worship team.