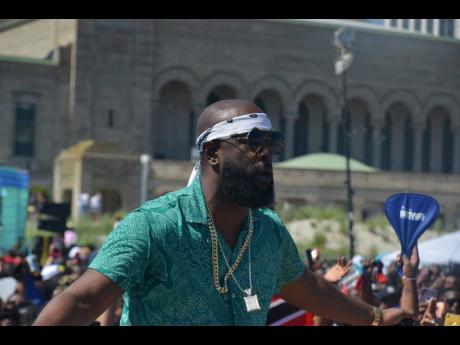 Given the identity as a pioneer for the fusion of Jamaica’s musical genres with soca - the music of his home – Trinidad’s Bunji Garlin falls right into place in the Reggae Sumfest line-up of events.

The soca megastar turned 41 on Sunday, but will celebrate his birthday tonight at Blitz ‘All-Black’ at the Hard Rock Café in Montego Bay.

“After realising my birthday would fall in the same week, the Reggae Sumfest family pitched the idea to host me as their guest when they hosted their launch in Trinidad and I obliged,” Bunji Garlin told THE STAR.

The entertainer said he was in the process of planning to have a birthday party in Trinidad, but he also admits having a track record of celebrating his birthday all over the world, from a birthday cruise back home to grand parties in the US and St Lucia.

Last year, he was surprised by fans in Japan with a cake after a performance.

The Big Bad Soca entertainer has never experienced a Reggae Sumfest concert and is working out plans to be in Jamaica until after the weekend.

“Well, I think Reggae Sumfest is a great introductory stage and my team has been contacted many times over the years to be a part of the stage event, but the bookings are usually already fully in, so we always end up having to turn it down,” he said. “When the time comes, though, it will be a very serious marker in the Caribbean community, because soca in itself isn’t known to be a part of something like this, and understandably so. But the fact that we have been contacted so many times for this also means that there’s a new frontier with the advent of so many collaborations between dancehall/reggae and soca artiste and that builds for a stronger people entirely.”

Bunji Garlin has been dabbling in dancehall and reggae from his secondary-school days, and after getting a breakthrough in the early 2000s, his brand became popular with Jamaican-dominated or themed events in the US.

“It was always like a proving ground, until it became recognised as something real. So it continues, and I have built a lot of musical relationships with a wide cross section of the artistic contributors of and from Jamaica and Jamaican background,” he shared.

He spent the better part of the weekend celebrating with the patrons of Beach Road Trip (BRT) Weekend in Atlantic City, New Jersey, where he performed at Xtreme Wet ‘n’ Wild last Saturday.

Alas, patrons of the ‘blitzy’ birthday celebration may not get to see the Trinidadian perform.

“I don’t think I wanna be sober enough to touch the microphone, but we’ll see what happens; I think my friends and fans are gonna wow me more than me wow them,” he said.