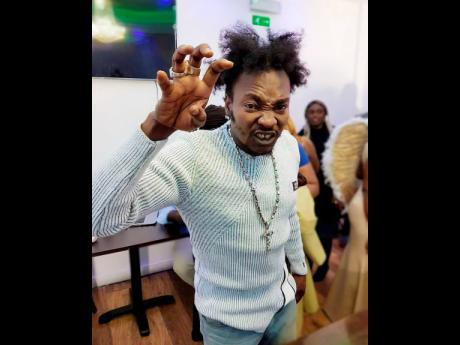 It has been 17 years since outspoken social media vlogger/comedian Rawpa Crawpa migrated from Jamaica to the United Kingdom to follow his dreams of becoming a globally recognised entertainer.

As an aspiring entertainer with a speech impediment, it was a difficult feat to get persons to accept him, but he found a way to overcome it through deejaying.

"I used to get mocked for it. My father and aunts stuttered, and as genes would have it, my children and I ended up with it, but it's difficult for persons to pick up on it when I speak fast or deejay," Rawpa Crawpa told The STAR. "Although I've been living in the UK for a long time, my accent is still very strong and I speak a lot of Patois, because it is easier to work with my native tongue rather than try twang ... that only will mek mi buck-buck when I speak."

Rawpa Crawpa, whose given name is Leonard White, admitted that he sometimes makes mistakes while making videos "because maybe a word does not come out properly, but most times it turns into a little expression".

He said persons should not be ashamed of their speech impediment, but should find a method of control that works to their advantage and stand tall.

"I used to feel shy, and sometimes persons laugh, but I turned that laughter into positive feedback and eventually found my own way of managing, I got the stutter under 90 per cent control through deejaying," he said. "Individuals that stutter need to know in their minds that they have a goal and to execute it. There is no space to mek anybody faze wi, and for those persons like me with a creative mind, theatre and music is a good pathway to get pass the stutter to lead to great success."

He has recently returned to his musical roots, doing the track The Children Are The World in collaboration with dancehall deejay Harry Toddler.