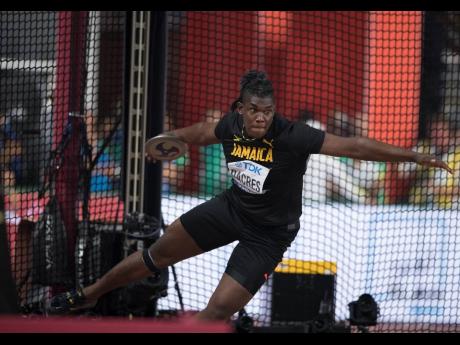 Fedrick Dacres in action in the discus final at the recent IAAF World Championships. The discus will not be among the Diamond League events next year.

Sebastian Coe and the International Association of Athletics Federations (IAAF) seem hell-bent on killing a sport that in the past few years has become increasingly vulnerable.

The organisation's decision to cut the 200m, discus, triple jump, and 3000m steeplechase from the Diamond League for the 2020 season is a backward step.

The IAAF said that its decision was based on research conducted "in China, France, South Africa, and the USA; post-event surveys in Belgium, Great Britain, and Switzerland, and click-throughs on Diamond League social-media videos during 2019".

That survey showed that the three most popular disciplines in the Diamond League are the 100m, long jump, and high jump. The pole vault, 200m, and 400m are next most popular.

It seems to be that at the very outset, the IAAF and Diamond League contradicted themselves when they decided to cut the 200m.

Beyond that, they shoot themselves in the foot. In the absence of Usain Bolt, perhaps the most popular athlete in the history of the sport, Noah Lyles stands on the cusp of becoming the next big star.

His personality, whether contrived or not, and the fact that he ran 19.50 seconds last season in the 200m will now be relegated to the sidelines.

The epic battles between two of the world's best triple jumpers, Christian Taylor and Will Claye, and others, will no longer be seen on television.

Fans of the discipline will also not see a potential world record from Yulimar Rojas of Venezuela on the women's side.

Jamaica's Fedrick Dacres and Sweden's Daniel Stahl are flinging the discus out to distances not seen in more than a decade, and those epic battles will also no longer be seen on television.

This will, effectively, drive some fans away from the sport just because the IAAF needs to pack everything into a 90-minute television broadcast, meanwhile denying scores of athletes the ability to earn.

What the IAAF needs to do is find innovative ways to promote the sport.

Encouraging clashes, highlighting personalities within the sport, marketing events, and getting the faces of the athletes out to new fans are a few things they could try.

Cutting events will not solve the IAAF's problem. The sport is already starved of cash after losing sponsors like Samsung and Adidas, which speaks clearly to the fact that there is a need to fix the image of athletics.

More needs to be done, I agree, but in the case of track and field, less is not more.